“Hello, my lovely,” said the saleswoman at the furniture store.

“Thank you, my lovely,” smiled the Tamar Bridge toll-lady.

“There you are, my lovely,” chirped the waitress at the National Trust cafe counter, as she presented two steaming mince pies and cups of hot mulled wine.

I have never been referred to as “lovely” before, particularly by a stranger, but I must say it’s something I could get used to. I guess you could say that my search for loveliness is a big part of what brought me back to England. England is many things to many people, but it’s gentler side is undeniable, and for me, irresistible. In a world full of problems (from which this crowded little isle is certainly not exempt) Britain’s beauty and grace, and the general good nature and positivity of it’s people are most refreshing. While America and Britain have a great many things in common, including a language (more or less) and enjoy an ongoing, if slightly dysfunctional love affair, there are also obvious differences. I tend to think of America as being like Britain on steroids. Everything in America is bigger, bolder, flashier, costlier; from cars to shopping malls, houses to national parks, grocery bills to medical coverage, America has been, literally, “supersized.” To paraphrase Bill Bryson, in America, if one wants to experience the great outdoors, one drives, sometimes a great distance, to a National Park and pays a substantial fee in order to take a walk in the countryside. In Britain, depending where one lives, a country ramble may start at one’s front door, proceed through a village, onto a “public footpath” across a farmer’s field, past a herd of grazing sheep, through a wood to a seaside coastal path, with stops at a 16th century pub or tea house (or both) before returning home. This is accomplished due to the fact that this little island is basically viewed as shared space. “No trespassing” or “keep out” signs are extremely rare. “Trespassers will be shot” signs are non-existent. Again, to paraphrase Bryson, England is basically a large green space, dotted here and there with cities, towns and villages. Lovely, indeed.

Christmas, as we know it today, is very much a result of English tradition, developed over a great period of time. If it’s one thing that England has, it’s a very long history. My family name, Walmsley, goes back as far as one can go in Lancashire, where I was born. I guess it’s a bit like those born in the U.S. saying their family arrived on the Mayflower. Of course, today either of these claims, along with four bucks (or three pounds) will get you a coffee at Starbucks.

The Victorians were responsible for many things, among them popularizing Christmas trees, Christmas cards and Christmas crackers. Prince Albert of Saxe-Coburg, Bavaria, (then soon to become a unified Germany) was the husband of Queen Victoria, the great, great, grandmother of both the current Queen, Elizabeth II and her husband, Prince Philip. (For those scientifically-minded people wondering about the British royal family swimming in the same gene-pool, rest assured that in the interim, there were a number Germans and Greeks involved, genetically speaking, on Prince Philip’s side.) Queen Victoria is credited as being the “grandmother of Europe." In the early 1900’s, Victoria’s grandchildren ruled not only Britain, but Germany and Russia. How these first cousins allowed their countries to drift into a world war against each other absolutely defies reason. But, I digress…

Prince Albert was an extremely well-loved figure in England. He adored children, as well as a good celebration. The Albert Hall and Victoria and Albert Museum, both in London, are named in his honor. Among other things, Albert is credited with introducing the German idea of bringing a lighted Christmas tree into the house, to England. Thankfully, no-one kept records as to how many thatched cottages were destroyed as a result of this practice, and the tradition continues to this day. Christmas cards were created by an English post office worker as a way to drum up holiday business, and this idea too caught on like, well, wildfire, in Britain as well as in America, at least until the advent of the e-card. Call me old-fashioned, but being the sentimental old bugger I am, I still prefer the hand-written type.

Long before the popularity of radio, television and computer games, Victorians were extremely adept at creating their own amusement. Theme parties were popular, with each guest arriving in costume, dressed as a different character. The guests were obliged to remain in character for the duration of the party. Of course, in-home musical performances, recitations and self-produced skits were popular, too.

For the uninitiated, Christmas crackers are not something one eats with Stilton cheese. Again, for Christmas, some enterprising Victorian came up with the clever idea of taking little gifts and silly paper hats, rolling them in colorful Christmas paper and twisting the ends. By adding a strip of paper with a bit of gunpowder on it, the crackers would pop when the ends were pulled apart, creating the “crack.” Hilarity ensued. Apparently, there was never a dull moment in Victorian England.

Like millions of others in the U.K. and America, I think the Christmas holidays are as good an excuse as any to over-eat. Almost everyone can relate to the idea of “comfort food,” and for me, the Christmas food offerings in England fit the bill like nothing else. My wife Marion and I rolled out of several Cornish village Christmas markets this December after filling up on hot mulled wine and cider (a Cornish favorite), mince pies, Christmas pudding and chocolates. Say what you will; to me, other than the sound of Bing Crosby singing “White Christmas” on the old Tannoys, nothing conjures childhood memories of Christmas like traditional English food.

This year, Marion and I decided to head off by train to the “big city,” London, for a few days. London is the largest city in Europe and is like no other in the world. It is a true melting-pot of people and cultures; of old and new. One can not say they have seen England without visiting London, just as one can not say they have seen England without venturing beyond London. Our goal was basically to wander, soaking up the atmosphere of London at Christmas time. The city did not disappoint. It was alive and vibrant as always, with the brilliantly-decorated, rain-soaked streets jammed with shoppers and tourists. The new Southbank Christmas Market, Hampstead Heath, Piccadilly Circus, Trafalgar Square, Soho, Covent Garden, Harrods, Selfridges, Oxford Street and Regent Street were all highlights. Un-traditionally, we tried a new Mexican restaurant for dinner, which was full of locals wearing loud Christmas pullovers and quaffing margaritas. Now, I wouldn’t normally recommend a Mexican restaurant for a first-night dinner in London, but hey, we live here, and we wanted to try something new. (It was actually quite good. After a few years away from Southern California, my enchilada and tequila “jones” was satisfied!)

I often find when traveling that the best “finds” are unexpected ones. Of course, I’m always a sucker for anything musical. On our walk through Mayfair we stumbled on a gallery featuring an exhibit of Bob Dylan’s artwork, mostly pencil drawings and paintings. The images were ones of people and places he had encountered during years of touring. Previously, I had only been familiar with a few album covers he had painted over the years. We were both very impressed with the quality of the work and the enormity of the collection. Each piece was inspired or at least paired with a handwritten lyric from one of Bob’s most iconic songs - a terrific marketing concept, I thought. I could have spent a least half a day in that gallery were it not for the fact that we were headed for a rendezvous with two other London-based music icons, who were, as they say, “separated by a wall and two hundred years” - Georg Friedrich Handel and Jimi Hendrix. 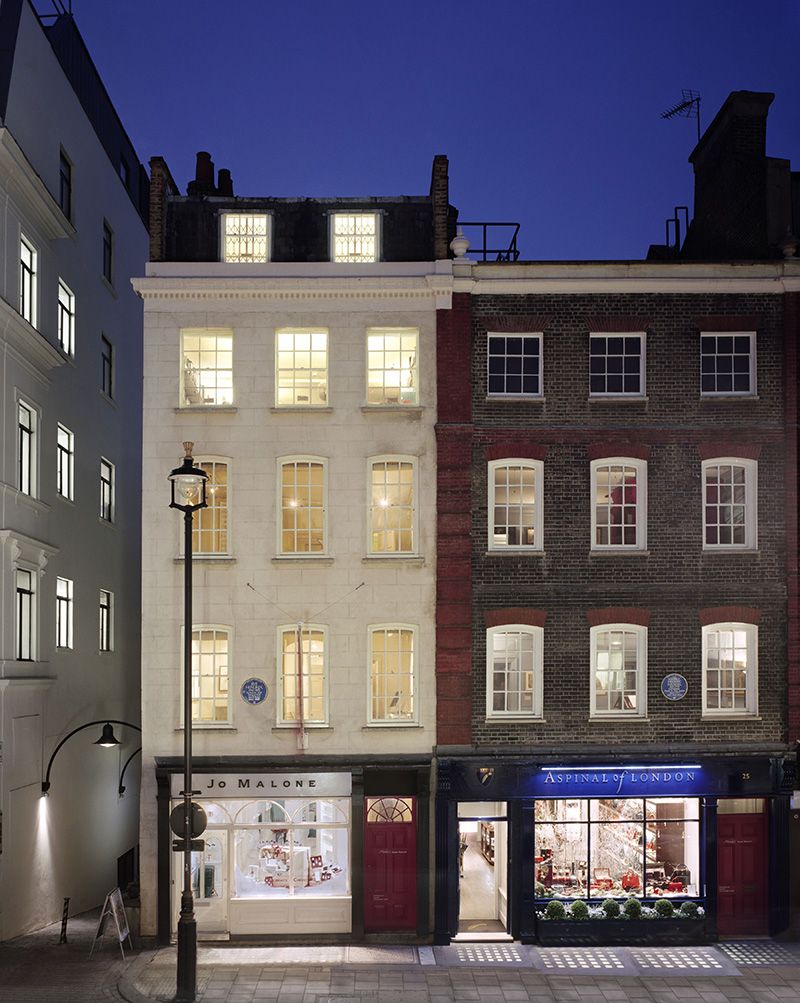 At numbers 23 and 25, in the same building in Brook Street, Mayfair, lived both Hendrix and Handel, respectively. For ten pounds, one can wander, self-guided, through both residences. There are several docents throughout to answer questions and share anecdotes. It was quite an emotional experience for me to stand, in the course of an afternoon, in the room where the “Messiah” was created, and moments later, the bedroom where “Electric Ladyland” was born. My mind flew back in time to 1969 - when I played cello in the Madison Junior High School Orchestra. That summer, the summer of “Woodstock” and Neil Armstrong’s walk on the moon, my proper English mother saw fit to take me, at thirteen, to the Newport Pop Festival at Devonshire Downs in Chatsworth, California to see Jimi Hendrix headline a bill of legendary talent. It was a long, hot, smoggy Valley day, and we were surrounded by a lot of drugs and some half-naked festival-goers, but it didn’t matter to me, nor to my mother, I think. She knew I was there for the music, and she was there for me. Now here I was, at sixty-two, standing in Hendrix’ London bedroom. I wish my mother could have seen that.

To get THEREALWALMSLEY blog right into your mailbox, sign up on www.jonwalmsleymusic.com

To order Jon's new CD as well as personalized autographs,

Are You A Racist?

Preface Well, I’m back. It’s been a long time since I’ve written a blog. In the past, my blogs have mostly had to do with music, entertainment, and Marion’s and my travel adventures, with a bit of soc

This Land Was Made for You… And Me (Epilogue)

This Land Was Made For You … And Me